Inkspot Antiques: An eclectic assortment of antiques and collectibles.

In this category, we list some of the most collectible types of cat's eye marbles, sometimes also called catseyes.

Manufacturers in Japan made the first modern cross-vane cat’s-eyes marbles about 1949, and they began to be widely imported into the U.S. in the early 1950’s. While some American marble manufacturers made clear base machine-made marbles as early as the 1930's that superficially resembled cat’s-eyes marbles--notably Peltier Glass Company clear based National Line Rainbos and Akro Agate Sparklers-- most collectors do not consider these marbles true cat's eye marbles. Beginning in the 1950s, Peltier also sold a clear marble with a blob of glass at its core, nicknamed "Peltier bananas" which is generally classified as a type of cat's eye. The name derives from the fact that the simple curved form of the injected glass, which is typically yellow, red, blue, green, or white in a crystal clear base, resembles a banana inside the marble. While Peltier bananas have been sometimes reported to have been made as early as the 1930s, they were more likely introduced in the 1950s, and they were not sold as "cat's eye" marbles.

Many American companies tried to copy the Japanese designs when they were introduced, and by the mid-1950s, companies like Marble King and Vitro Agate introduced their own cat's eye designs. For a period between the 1950s and late 1960s, cat's eye marbles were among the most popular toy marbles made. Cat's eye marbles were made in other Asian countries and Mexico as well. In the 1950s, inexpensive Asian-made cat's eyes flooded the toy market. This competition, together with a waning interest in marbles as a sport during the 1940s, led many US glass marble manufacturers to close their factories, or cease production of some of the more expensive-to produce opaque marbles. Cat's eye marbles are still made today, and they remain the most common type of toy marbles sold in the world.

As a rule of thumb, vintage American cat's eyes tend to have very clear glass. Foreign-made cat's eyes also have very clear glass and can be of excellent quality (Vacor DeMexico marbles are superbly made, for example), but some foreign manufacturers also used poor quality recycled glass with a dark green tint, and these are among the least popular cat's eyes with collectors. Some vintage cat's eyes were intentionally made with blue, amber, or other tinted glass in limited production runs, and these can be quite collectible.

Marble King and Vitro Agate are the most common vintage American cat's eye marbles found because these companies produced so many compared to other U.S. makers. Vitro cross vane cat's eye marbles have thick colorful vanes, and the 11/16" multi-stranded Gladding Vitro cage cat's eyes, produced in the late 1960s to early 1980s, are among the easiest American-made cat's-eyes to identify.

Collectors classify cat's eye marbles by the number of vanes and the number of colors. Most multicolor cat's-eyes will have the colored vanes in "v" pairs. Unusual or uncommon varieties, like those where the vanes of one color cross the plane of another color, are especially popular with collectors, and have higher demand. The most valuable of these are the “St. Mary’s” cat's eye of Marble King, made at their St. Mary’s, West Virginia Plant before it was destroyed by a fire.

Other collectible catseye marbles are "hybrid" cat's eyes, where there is more than one color blended on a single vane. The Vitro cat's eyes both cross vane and cage types were often in hybrid colors, sometimes including 3-colors on a single vane. Look out also for rare colors, marbles with aventurine, three color nine vane cage cat’s eyes, and marbles with a colored glass base (blue is most typical). 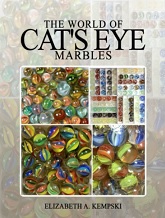 This is a vintage 3 vane 3 color cat's eyes with super clear glass. The vanes are white, green, and light purple-black. Neither U.S manufacturers,...
$1.29

This is a set of three vintage 3 vane 3 color cat's eye glass marbles with an ID card to help collectors identify vintage marbles like these. These...
$3.19

In this ID set, you will get two different representative Gladding-Vitro Agate Inc. cage cat’s eye marbles with an ID card with tips to distinguish...
$2.99

This is an ID set of four Marble King cat's eye marbles that we are offering to help new collectors identify vintage marbles. Included are four...
$2.79