Inkspot Antiques: An eclectic assortment of antiques and collectibles.

A uniform button's use and age is principally determined by three characteristics, usually considered together. First the "device" (design) identifies the service or state militia that used it, and generally when it was used. Keep in mind that certain devices were used for many decades, so other clues are needed. The buttons construction also offers a guide to age. Finally, the backmark may not only indicate the manufacturer, but if a particular mark or the manufacturer was in existence for a narrow time period, you can further pin down the likely age and use of a button.

Some rules of thumb of age can be made as to how the shank is attached. A one-piece button with a brazed shank (soldered appearance) is a design common in the 18th century, but was also made after. A two-piece button with a brazed shank is typical of 19th century. Two pieces crimped together were first made about 1813. Two-piece hollow rounded buttons held together by a thin rim ("staff" buttons) were invented in the 1830s and used until 1902. Civil War era buttons may show a circular depression at the base around the shank. Shanks inset into holes in the button is typical after World War I. Tinned Iron Back (TIB) and stamped brass turret back buttons are common from the 1880s to 1920s. Sometimes one of the best indicators of button age is the manufacturers backmarks.

Prior to and during the Civil War, Scovill was the most prolific button manufacturers. The Scovill name is common on buttons from the 1830 to the 1970s. The original Scovill partnerships and companies were located in Waterbury, CT, so often the name Waterbury also appears on Scovill buttons. The brothers J. M. Lamson Scovill and William Henry Scovill operated the business from 1827 to 1840. These buttons are generally marked "JML Scovill..." or "Scovills". The Scovills & Co backmark is found from around 1840 to 1850. Marks with variations of Scovill Manufacturing begin about 1850 (Scovill MG.- early 1850s, Scovill MF'G - mid 1850s). Below are some of the many Scovill backmark variations.

There are a two acronyms commonly seen when button backmarks are described.
RMDC: Backmarks with a raised mark in a depressed channel. These generally date to the 1830s to 1850s.
DM: Depressed marks (the lettering looks hand stamped into the metal). These typically date to the 1860s and later.

Keep in mind that using Scovill backmark lettering (including dots and stars) is not a foolproof method because Scovill often used old backmark dies to make newer buttons. Thus it is possible to have a World War I "Great Seal" button with an 1850 backmark. Another nuance is that while text may remain the same, other embellishments on Scovill buttons change with time. An 1850 backmark may have the name in a groove or one or two rings made of fine lines or tiny dots, whereas a later button may have no ring of dots (like the Great Seal general service button below). 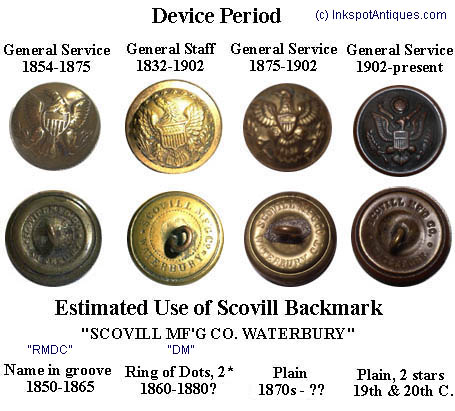 General Service 1902-present: (enlisted men and officers) Great Seal of the US. One and two-piece buttons. See list of "Great Seal" button marks.

Millions of buttons are manufactured every year, and many modern U.S. military buttons lack backmarks. Army and Navy officer buttons from the Korean War, Vietnam War, many used in World War II, and those used today are mostly indistinguishable. These modern U.S. military buttons have little value, except as replacements for lost buttons (if they are in good enough condition). Some military designs, like the navy anchor, eagle on anchor, fouled anchor, and the older army officer eagle were always popular on non-military clothing. If you purchased a blue blazer with brass buttons in much of the 20th century, the fashion buttons would often be of an eagle or anchor motif similar to military uniform buttons. These military styled buttons are sometimes passed off as military uniform buttons today, but their designs do not precisely match the military designs, and they typically lack the detail and quality found in regulation uniform buttons. Adding to the confusion was that some manufacturers, like Waterbury, used the same backmarks for decades on military, private company uniform, and brass fashion buttons. Sometimes foreign buttons get mixed up and added to collections. German Navy buttons are a type that often go unrecognized.

Even some military button references appear to contain errors. Tice shows a Scovill button with a design of a fouled anchor with a rope border, similar to the one pictured here (TICE NA 236), and stating Chief Petty Officers started using these buttons about 1840. This is nonsensical, because the U.S. Navy did not create the rank of Chief Petty Officer rank until 1893. Albert shows the same button as NA131, but does not attribute a date, but still identifies it as a Chief Petty Officer button. However, no website devoted military uniform history, nor any of the historical texts make any mention of Chief Petty Officers wearing a unique style coat button. In fact, regulations from 1905 and 1922 posted online state Chief Petty Officers are to use same buttons as the other officers, although on one coat, it is a slightly different size.

Finally, button manufacturers are manufacturing authentic-looking antique military buttons for military reenactment groups and societies. While the designs of these buttons are generally accurate, their quality and detail in the design is usually inferior to the originals, and the backings are very different. A Google Search for Civil War reenactment brass buttons will provide a sense of popular antique U.S. military buttons.

Do you think any of this information is wrong? Then please send us feedback.